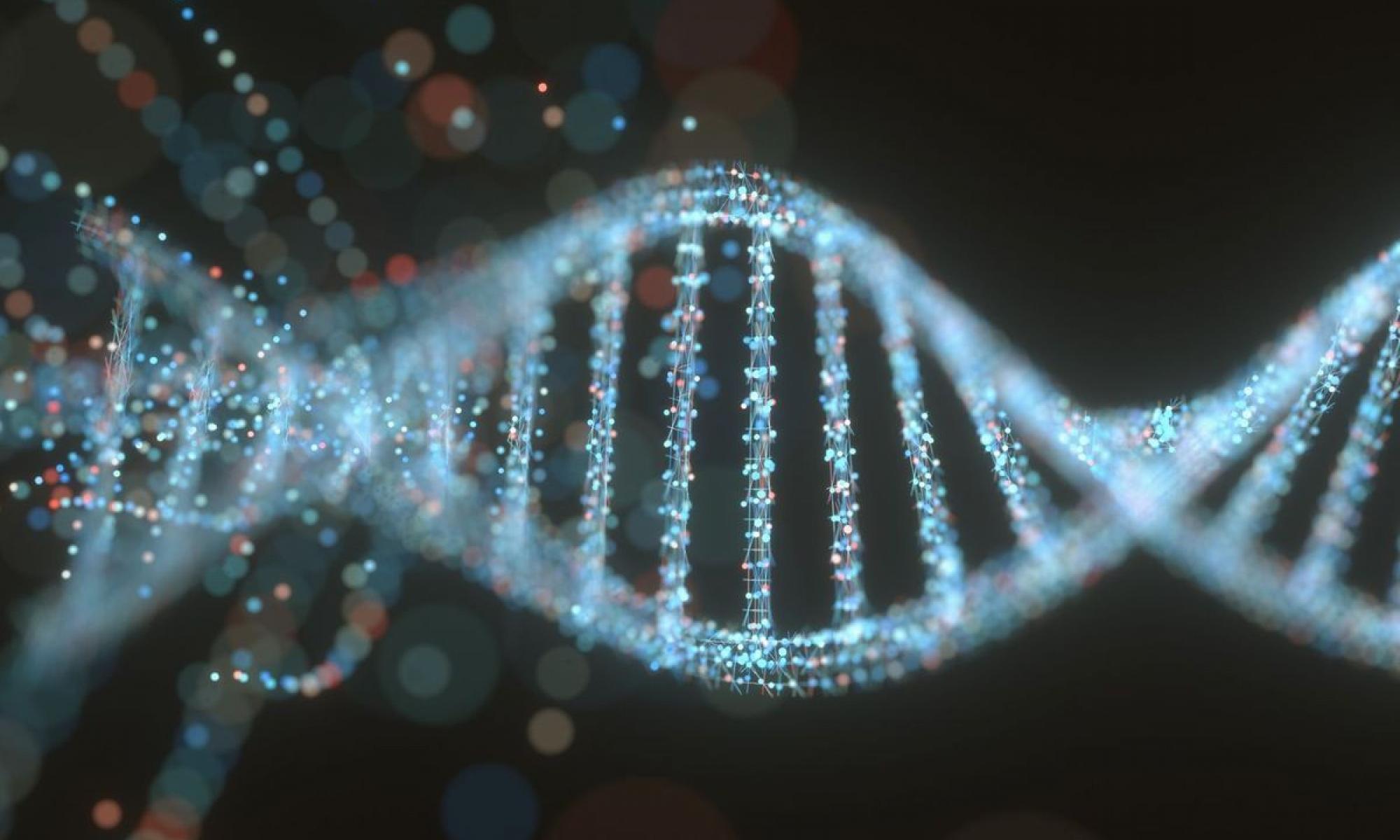 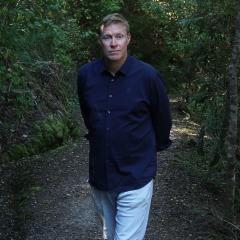 David Koepsell explores the murky areas between privacy rights, intellectual property law and scientific requirements in genomic research. His ethical focus considers the desperate need for scientists to have access to the widest possible array of genetic data for ‘precision medication’ and the need to protect those that share their data from potential risks associated with the identification of people through their DNA.

A bioethics philosopher and lawyer, he became concerned about the ethics of genomic patenting by private companies. His 2009 book, Who Owns You? The Corporate Gold Rush to Patent Your Genes examined the implications of wide-scale genomic sequencing and the fact that—at the time he wrote the book—corporations, research institutes, and universities owned 20 percent of the human genome. Who Owns You? was published a few months before the American Civil Liberties Union led a lawsuit to stop the practice of gene patents, like those of Myriad Genetics, who had patented the BRCA1 and BRCA2 mutations so they could monopolise the market of testing for that predictor of breast and ovarian cancers. The patenting of these genes meant that if a person wanted to test whether they had the mutations, they had to pay Myriad Genetics  for rights to the genomic sequence. Koepsell co-authored an amicus brief for the US Supreme Court, which in 2013 implemented a ban on genetic patents. Curiously, the decision also applied to individuals—as a result, and as a side effect of the prohibition on genetic patents, you can no longer own your own genes.

Koepsell is adamant that scientific innovations and medical treatments require genomic data to make breakthroughs. Certainly, genomics has tremendous promise for health and medicine through targeted therapies based on detailed knowledge about a patient’s genes. Yet scientists require access to a wide range of genetic data, from as diverse a population as possible, to develop innovations and medical breakthroughs. Koepsell reasons that "personalized medicine based upon genetic data should enable better, targeted care, greater efficiency and efficacy, and reduced costs as a result. This future depends now on acquiring a lot more data, both genomic and medical, from many more people.”

As reported by The Lovepost, a lot of this data is being provided to scientists by onselling genetic data through voluntary contributions of gene information to ‘recreational’ sites like Ancestry.com and 23andme. Koepsell argues this is exploitative, as users are not aware of the actual market value of their genetic data when they provide it to these databases for subsidised ancestry testing and give voluntary consent for it to be used for scientific research. However, these companies do not use the data for scientific research but for their own profit, by selling it to pharmaceutical companies and research organisations. Koepsell cites analysis which notes that sometimes a person’s genetic data may have been onsold over 200 times, giving the company an indirect ability to exploit a loophole where they can effectively ‘own’ and trade users' genes with no requirement for transparency or compensation.

Koepsell believes genetic data is the last frontier of intellectual property because currently there “is no real definition legally about our relationship to it. We cannot own it, even that which is about us as individuals.” He notes that its value is skyrocketing and profiting private companies, and “without some deep philosophical, political, policy and legal thinking, it will all continue to be used, proliferate beyond our control, and in ways that may eventually come back to bite us.” 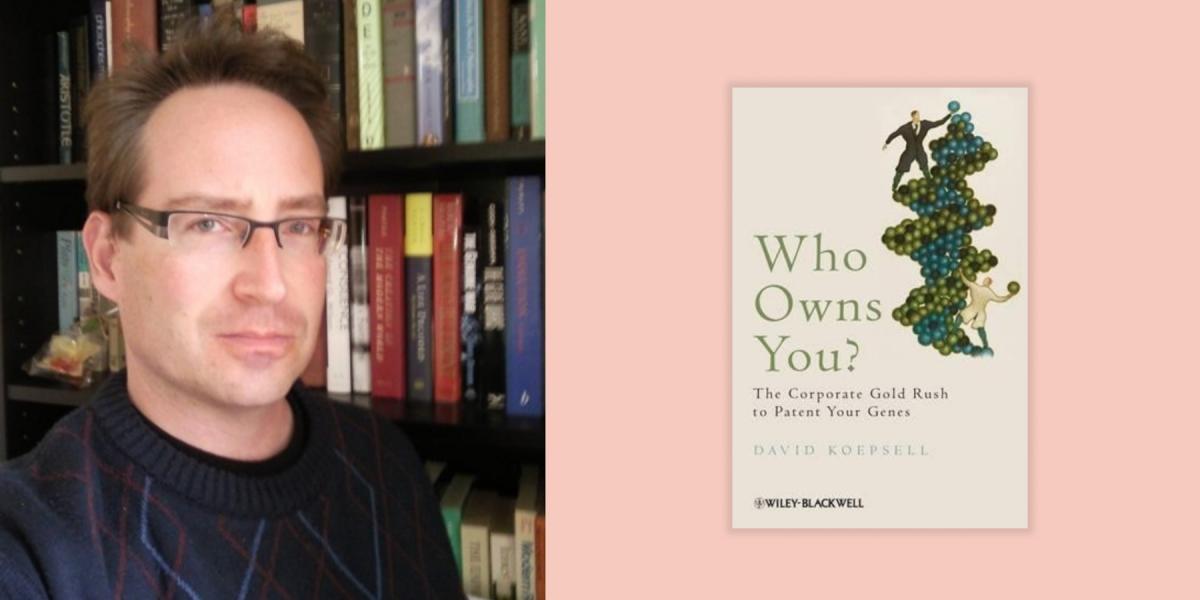 David Koepsell CEO and co-founder of EncrypGen, Inc., the world's first genomic data market mediated by blockchain and the author of the book Who Owns You? The Corporate Gold Rush to Patent Your Genes.

Koepsell contends that governments and private companies’ monopolisation of health research is the crux of the problem from a social justice perspective. He sees this as not just a problem with genomic data but with scientific data in general, as it is often hidden behind journal subscription paywalls. Koepsell believes genomic data for science should be freely available and widely shared: "It’s the nature of science that it works best if data isn’t monopolized, and that researchers everywhere have easy access to it. As well, those whose bodily tissues and data contribute to scientific progress should be recognized and, where reasonable, compensated.”

Koepsell points to historical precedents about how monopolisation leads to a lack of compensation to the key people and families involved. He cites the case of Henrietta Lacks, whose cervical cancer cell samples, taken without her consent, led to the discovery of the first immortalised cell line. Their discovery has underpinned major advancements of modern medicine for treating cancer, infectious diseases and immune system disorders. Koespell contends that Lacks "is a prime example of a woman who belonged to a minority contributing massively to scientific progress, and profits, but who died poor and largely unrecognised." The stark imbalance between the profits earned by research institutes derived from experimentation with Lacks' cells and the absence of consent, compensation and acknowledgment to Lacks and her family underscores the problem. He notes: "Social justice demands better recognition of minorities who are contributing to science and better distribution of the rewards."

Koepsell asserts that ethically sound policy for genetic data research must include transparency on how the genomic data is used, ensure and protect the privacy of those that share their genetic data, and must ultimately give the person who provides their genetic data some form of ownership and control over how it's used. He explains: "There will need to be a conversation, if not ultimately some form of regulation, that provides each of us with something resembling ownership of our medical and other valuable data, including genomics. Technology alone won’t provide this."

In the meantime, Koepsell’s arresting solution in the absence of regulation is to use blockchain technologies and the free market to regulate genetic data as if it were a natural resource. Without protection as policy, he maintains that democratisation of genetic data through free-market forces is the only workable solution, in the short term, to ensure the data is readily available for research, while people’s privacy and autonomy and control of their genomic data are maintained.

Koepsell has formed the start-up, EncrypGen, a market platform that uses blockchain, an electronic ledger that is the basis of cryptocurrencies such as bitcoin, to allow people to upload and encrypt their genomic data and then sell it directly to the pharmaceutical companies or researchers they choose. Users of recreational genetic testing sites simply should opt to deny consent for the company to use (sell) their genetic research. Once a person receives the representation of their genetic data they can then upload to the EncrypGen platform. Koepsell maintains that EncrypGen “solves the problem of monopolization of the data by the big genetic testing companies, and brings consumers of those tests to the table as empowered sellers of their own de-identified data.” An essential aspect of EncrypGen is that it circumvents the ownership restrictions by allowing people to sell a representation of their genome, not the actual genome itself. EncrypGen, Koepsell continues, “overcomes data scarcity issues and lack of diversity in available genomic data by financially incentivising users to share their genomic data. This will ensure that there is a lot of data available but still allow individuals to control how their data is used. People maintain power in the form of control of their data and who they share it with.” 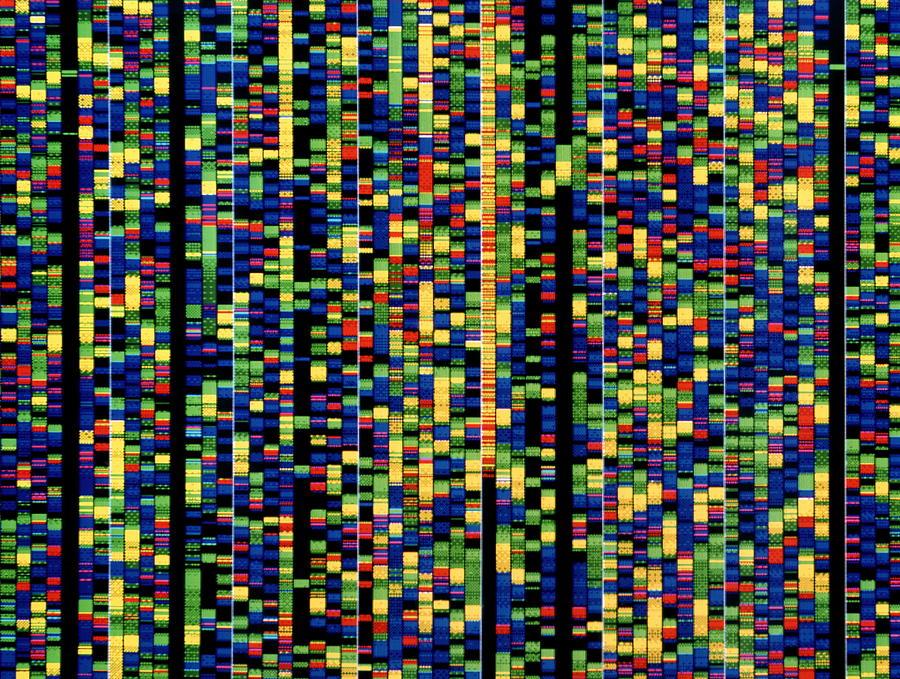 The three billion base pairs that form the genetic code of human DNA are collectively known as the human genome and each of the coloured bands represents the position of one of the four nucleotide bases that form the code.

User anonymity and their right to privacy is a fundamental aspect of EncrypGen as "some research has shown that a fair amount of genomic data that is publicly available can be re-identified, even though there are some laws that require that the use of genomic data must not contain identifiable information.” While there is now a law in the US that forbids the use of genetic data for discrimination in employment and insurance, Koepsell notes that without adequate safeguards in place, genetic data could stigmatise or discriminate against those with genetic differences and lead to a pretty scary “sci-fi scenario where genetic individuality [could be] used to create targeted pathogens,” which he warns “is definitely being researched by various nation-states.”

Police enforcement agencies are increasingly tracking criminals through their relatives' DNA on public genome databases, leading to high-profile arrests such as the Golden State Killer. Koepsell agrees we must consider the right to privacy alongside the need to reduce social harm: “There can be a balance. De-identification of data in public does not mean necessarily de-identification of the data entirely. The ability to re-identify in appropriate circumstances and remain consistent with due process is the balance we currently have, and which helps ensure that law enforcement can access data only with the proper procedures, and with oversight by courts.”

Koepsell will not enter into a debate about whether those that want the genomic data might exploit economically vulnerable people through confusing and overly technical policy wordings at the point of sale. For Koepsell, “It’s only exploitation if the data seller isn’t fairly paid, which is the case for the hundreds of millions of dollars worth of genetic data sales being conducted now by the testing companies. Anyone selling data on our Gene-Chain sets their own price and terms for selling the data.”

EncrypGen’s role is as a host for the data; anyone can join, and researcher and subject contact each other directly. "Individuals will use it for free, as we have built it, to store and use their data for their own health, while choosing to expose metadata so that they [can] have their data used for science, and even get paid for it. It will be a quiet but complete revolution in health and science." 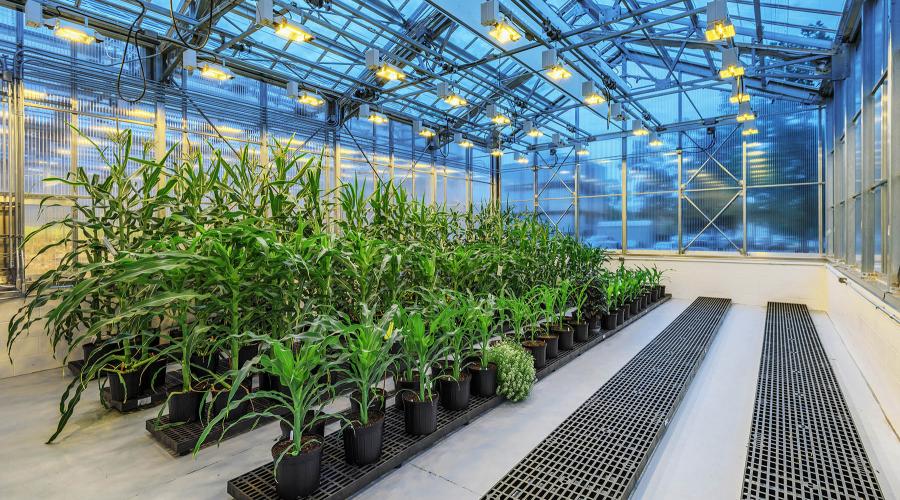 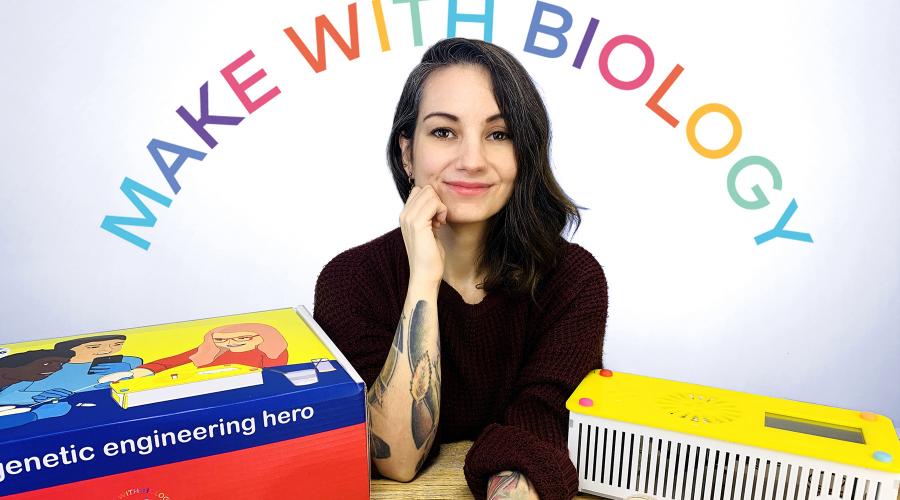 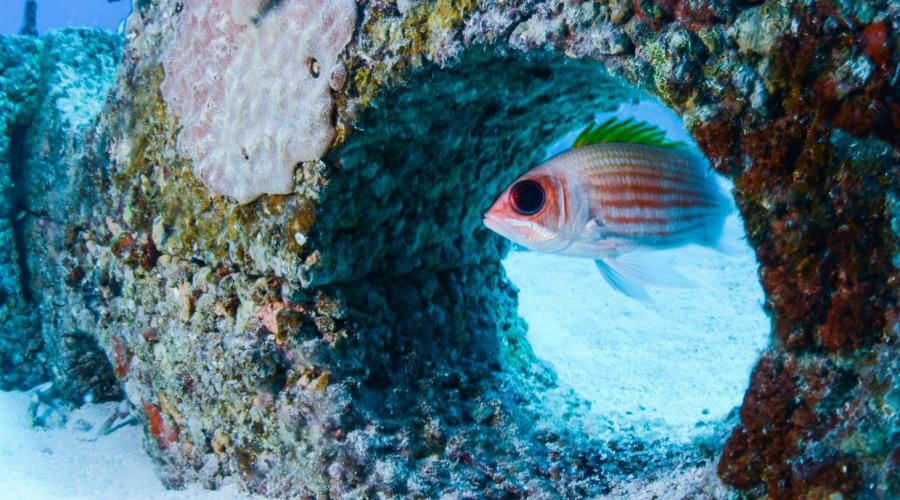 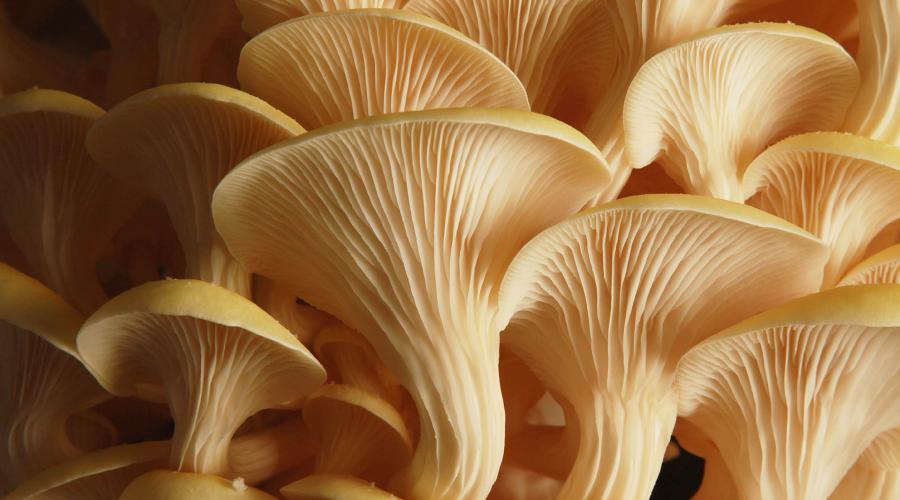