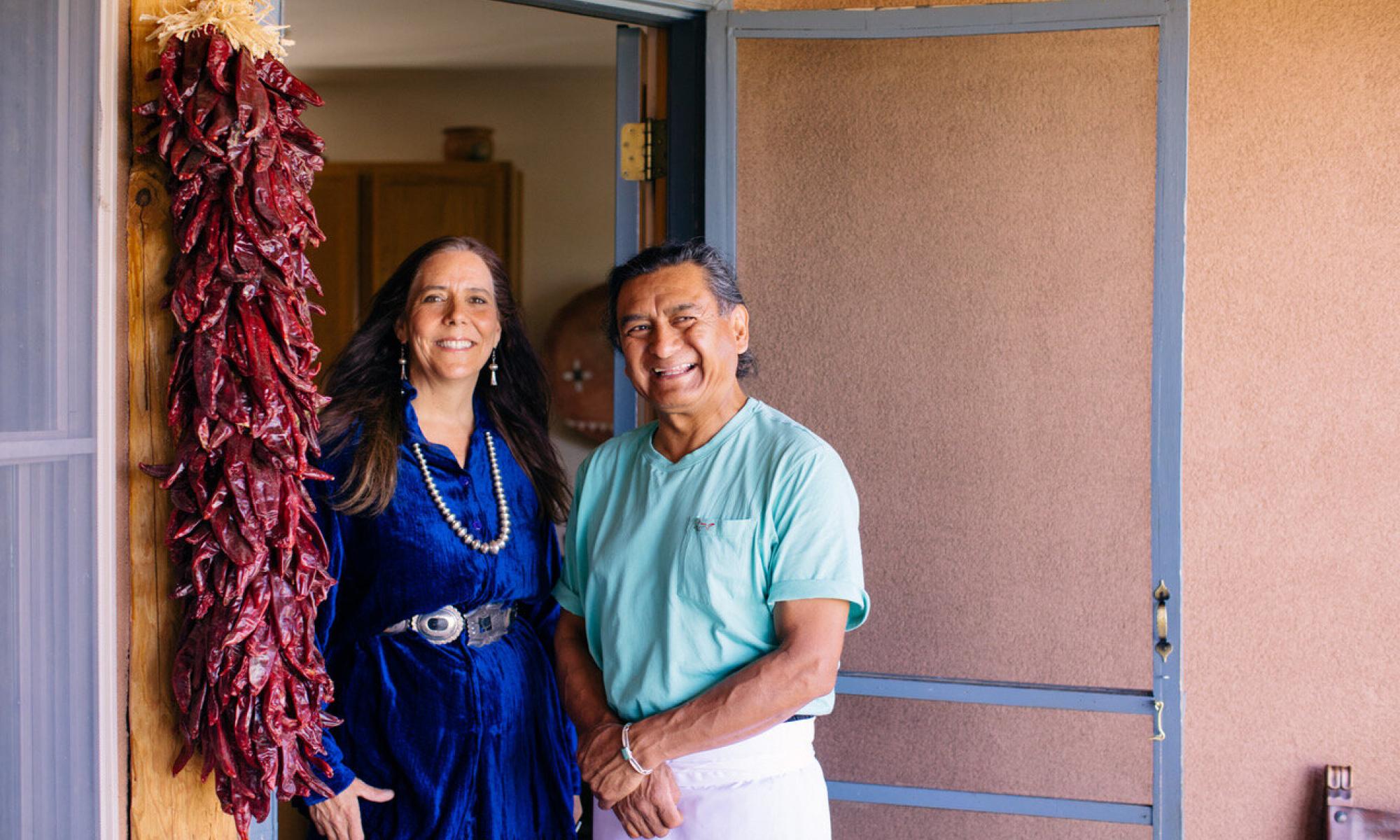 Lois Ellen Frank is a renowned Native American chef, food historian, educator, author and photographer on a quest to put Native American food on the culinary map. Equipped with a PhD in Culinary Anthropology, a Master of Arts in Cultural Anthropology, her own catering company Red Mesa Cuisine, and a cookbook that won the James Bearden Award, she's got what it takes to put Native American cuisine on the centre stage. Frank brings her heritage to life through her cuisine—a unique blend of flavour, nutrition, creativity, love and ancestral wisdom.

In part three of our series Where Are All The Female Chefs, Frank talks about the unacknowledged influence of Native American food on cuisines all over the world and the unique strengths that women bring into the professional kitchen.

Data suggests that only around 19 percent of professional chefs are women and only 7 percent are head chefs. What do you think is the reason for this gender gap in your profession despite the societal lore that a woman’s place is in the kitchen?

The professional restaurant kitchen today is based on a system that [the famous French chef Auguste] Escoffier designed in the early 1900s and it is centred around a European guild system. You start as an apprentice, then you become a journeyman and then you become a master. Being a chef traditionally took you your whole life to master. European guild systems were designed by men and it was only men [who] were allowed into them. Women have traditionally not been a part of this system in the Old World. But women have been revered in Native traditions especially in the knowledge that surrounds food.

With the introduction of culinary schools, both genders could become trained with skills and enter into a kitchen with the same skill set. Did you ever see the movie Julia and Julie? Remember the scene where Julia Child cuts the onions to prove that she had the same skill set as her male counterparts. And even then it was hard for her to be accepted in the French Culinary School she was attending. Women have traditionally ruled ethnic kitchens. They dominate there. They have prepared food for their families. They have harvested and collected plants and cooked them. They have nurtured the body but also fed the soul. It’s never made sense to me that they shouldn’t be a part of a commercial or restaurant kitchen.

There are also other factors that come into play. Women are built physically different than men. Being a chef is a very hard profession. You stand on your feet all day for many hours. You have to lift heavy pots. You need to have a great deal of stamina. It’s hard. I can remember when I first started working in kitchens. I tried to be equal to my male counterparts. But I’m not built the same. I can’t lift some of those really heavy stockpots, I need assistance. It doesn’t make me less than, it just makes me different. But give me a pair of tweezers and I can construct a plate that is beautiful in its presentation.  A plate that is true culinary art. I can give food flavour, make it delicious, make it nutritious, and prepare it with love. I can call in my ancestors to bless the food. What I do is unique to me. It is unique to being a Native American woman chef. No one else can do what I do. No one else can be me. What I bring to being a chef is unique to me and to me alone. 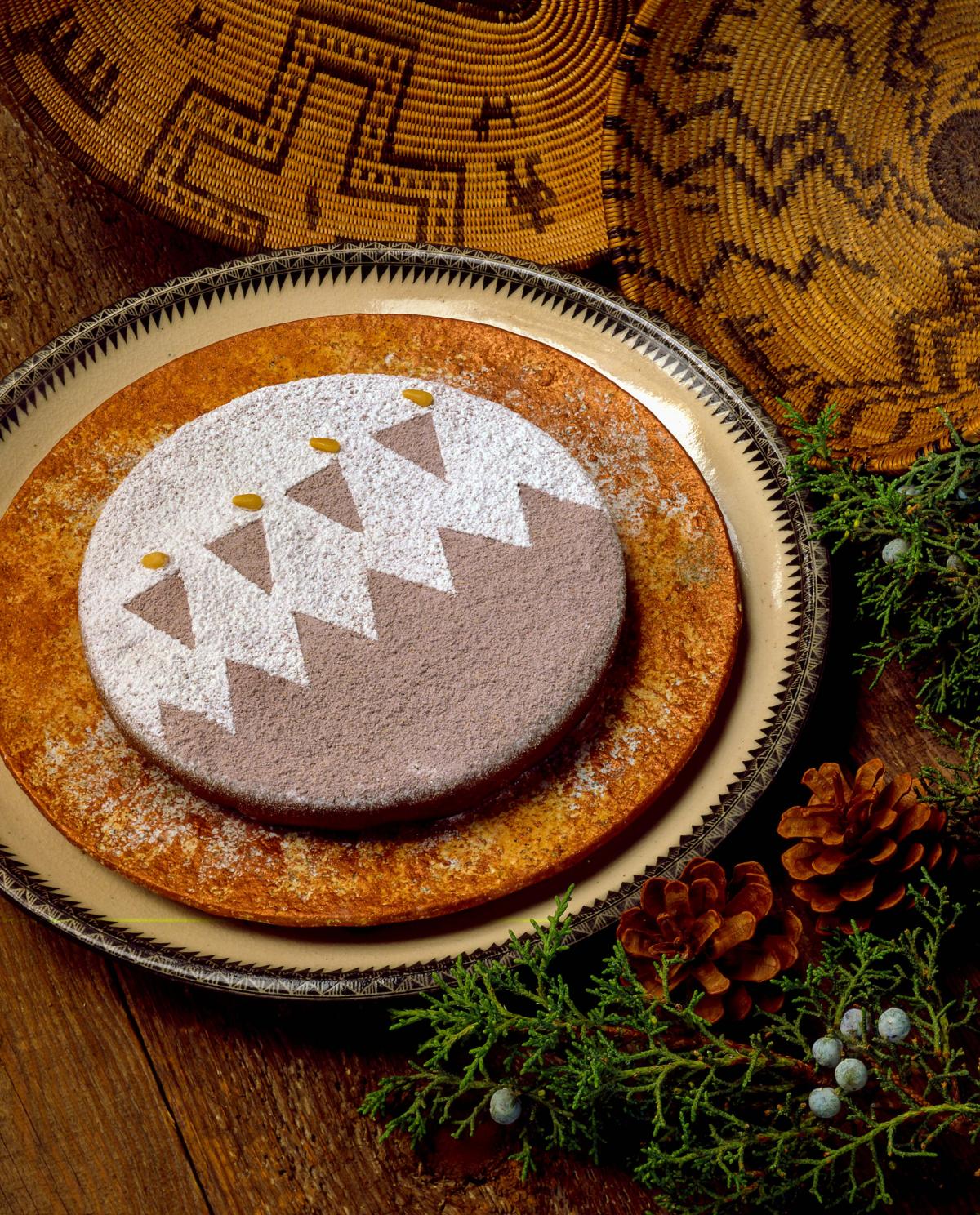 What do you see as the main barriers faced by female chefs looking to get into the industry?

I guess I’d like to reframe this and ask what opportunities do I see for female chefs. I think there is a balance when both genders are in the kitchen. I think the best restaurants and the best food I’ve ever eaten have come from kitchens with both genders in them. Women approach things differently. They handle stress differently. They have different aesthetics when it comes to food. I think now is the perfect time for women to become chefs. There are lots of niches for women now. I like that. I like the balance between male and female. I like to combine the two into a balanced perfect whole. You couldn’t have balance if you didn’t have both men and women in kitchens. It’s important. It’s vital. It’s time now for women to be a part of the food revolution, the sustainability movement. It’s time for balance.

To what extent do you believe a woman’s ethnicity or race influences her success in the food industry? Can you draw on some personal experiences as a female Native American chef?

I think ethnicity and race play a role. But more than those two factors it’s about what's inside the person. It’s about the passion she has. For me, passion has always been the driving force behind everything I do around cooking. I’m working with a business coach right now for Red Mesa Cuisine and getting clear about my passions. These passions are the driving force behind everything I do as a chef and small business owner. I want to use natural food in all that I do and create, I want to feed the body, and nurture the soul. I want to educate participants in every class that I teach about the ancestral foods of the Americas by telling the story of the foods I am using. I want to share my passions about food in every dish I create and present these ancestral foods with a modern twist. I want to use locally sourced and Native American sourced food with the metaphor “food is our medicine” and that this is the core value I use when sourcing my foods. I want to help all ages of people to cook healthy foods and enjoy the process of cooking, and I want to enjoy the creative process and work with vibrant people who share these values with me. 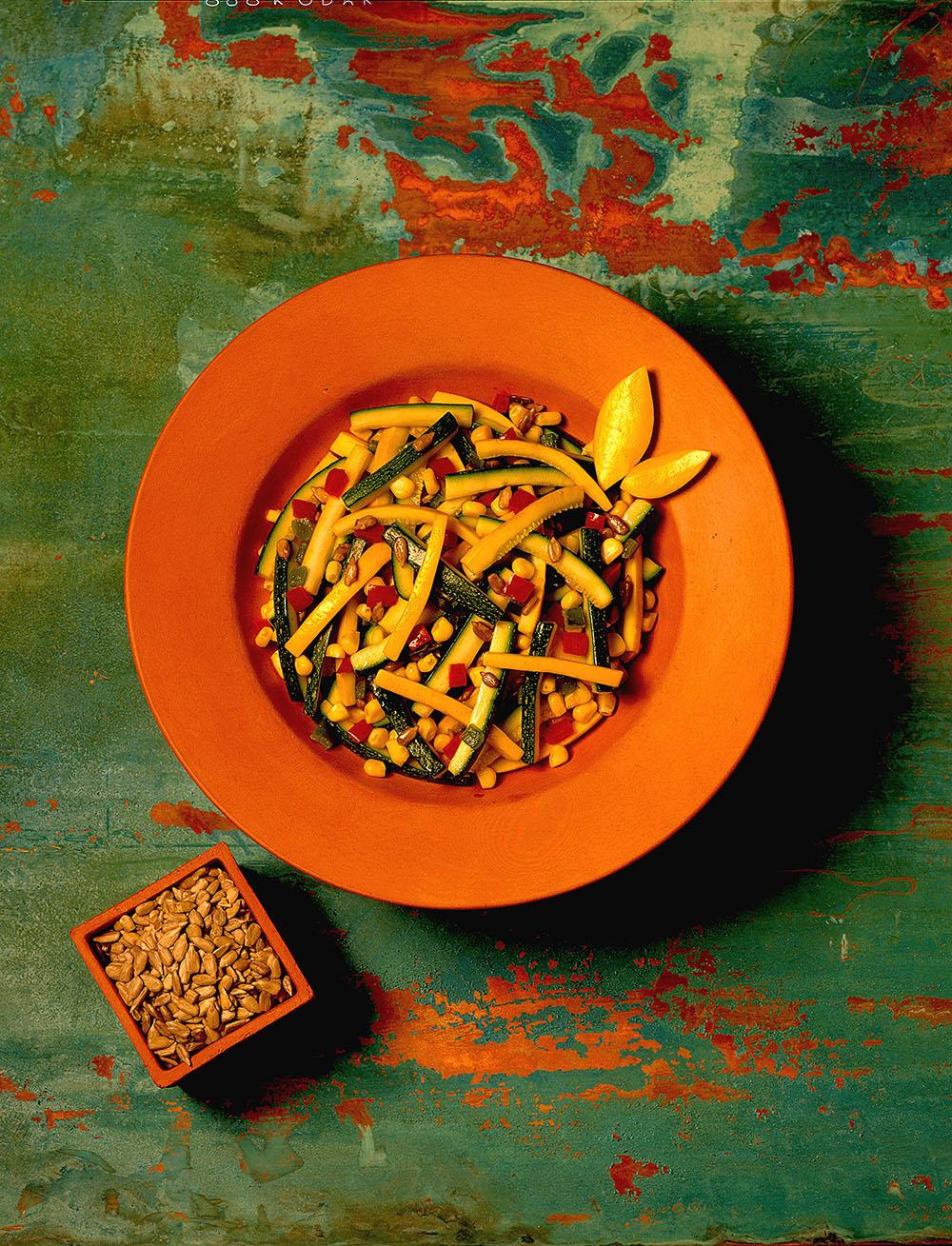 When I first went to New York City in the late 1980s to pitch to publishers a book on Native American cuisine, I was told that Native people didn’t have a cuisine. I was told that with a BA in Photography I had no credentials to prove them wrong.

I did do a cookbook, entitled Foods of the Southwest Indian Nations and it won the James Beard Award. And then as part of this process, I set out on another journey that took many years; I received a PhD in Culinary Anthropology in 2011 from the University of New Mexico, with a dissertation entitled, “The Discourse and Practice of Native American Cuisine: Native American Chefs and Native American Cooks in Contemporary Southwest Kitchens”. And now I have proven that without a doubt, Native people do in fact have a cuisine. And this cuisine is rich and diverse.

The dictionary defines cuisine as “a style or method of cooking, especially as characteristic of a particular country, region or establishment”. Of course Native people have a cuisine. It’s different than European cuisine, but it is, none the less, cuisine. This cuisine has distinct historical periods: 1. The Pre-Contact Period. 2. The First Contact Period. 3. The Government Issue Period. 4. The New Native Period. It has evolved and changed over time. It has innovatively fused components together from those historical time periods, and it is still evolving. It is being defined now by both Native American men and women chefs and cooks.

We are for the first time in history defining what this cuisine is in our own words and with our own terms. It is still evolving. And yes in some instances, it is being revitalised. It is being re-taught using modern tools in commercial kitchens with ancestral ingredients.

Women are a part of the Native Foods Movement. Women are helping to define what this cuisine is. Women are re-introducing how to prepare some of the ancestral foods and women are helping to revitalise Traditional Ecological Knowledge (TEK) surrounding food so that it is there for the next seven generations.

Why is Native American food so invisible?

It’s there. It’s all around us. It’s in all of the foods we eat every day. It’s just that Native people have [not] been given credit where credit is due. It’s because cuisine and food history is being told from a Eurocentric perspective. Not per se from a Native perspective. Take the magic eight—eight ingredients that Native people gave to the world.  These foods didn’t exist anywhere in the world until after 1492.

The magic eight are made up of corn, beans, squash, chiles, tomatoes, potatoes, vanilla, and cacao. Think about it. That means that the Italians didn’t have the tomato. The Irish didn’t have the potato. Half the British national dish, Fish and Chips, they didn’t have their chips. There were no chiles in any Asian cuisines anywhere in the world. There were no chiles in East Indian curries. And the French had no confection using vanilla or chocolate. Those are all Native foods. Those are foods shared with the world but never acknowledged by the cuisines that adopted the foods that were shared and given to them.

Foods like cornbread, Boston baked beans, succotash, guacamole, salsa, masa for corn tortillas and tamales. Those are all Native. The Three Sisters, corn, beans and squash, which we see in many “American” dishes today, they are all Native. There are so many foods that we eat today, that do not link themselves to their origins of being a part of Native American cuisine.

So it’s not as invisible as you might think. It’s just not known today by everyone. Americans are not educated on how many and how much Native foods they eat. 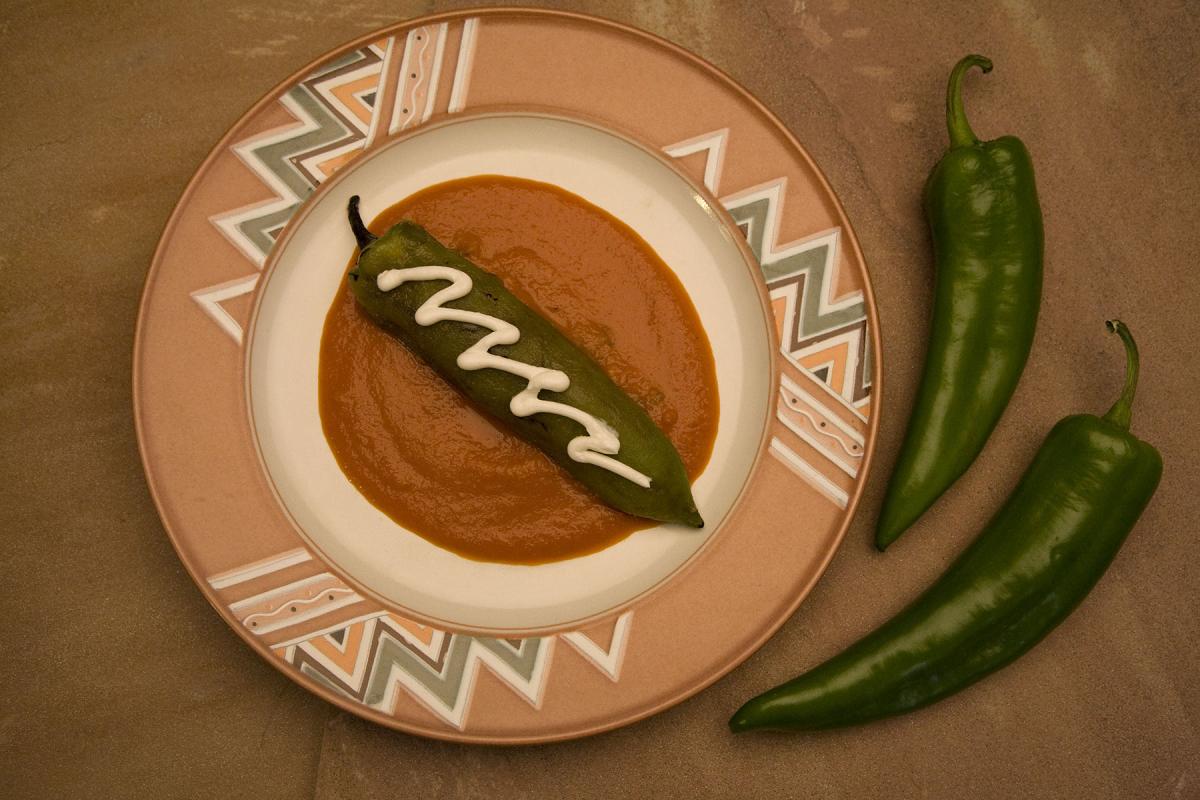 Research shows that males have better performance on muscular strength when comparing gender differences in physical ability. The role of a chef is often portrayed as one that requires a lot of muscular strength. What part do you believe this plays in the lack of females choosing this career path?

I’m sure it discourages some women. But that’s why we need a balance in the kitchen. We need both genders. We need both men and women. I think having a level head and the ability to think under extreme pressure is much more important than sheer physical strength. I think being able to be creative with food and make food taste good and look good are important skills as well. Being a chef isn’t just being physically strong. Two women can certainly lift a heavy stock pot together in the kitchen. Maybe one man can do that but there is so much more to being a chef.

What does it mean to be a chef?

And finally, I think that using the non-tangible ingredient of love and putting it into everything you prepare is integral to being a chef. I know that I try to put love into everything I make, and I sprinkle the wisdom of my ancestors in with the love.

Can you offer some advice to aspiring female chefs on how they can succeed in a male-dominated vocation?