Discovering the inhabitants of the oldest rainforest in the world 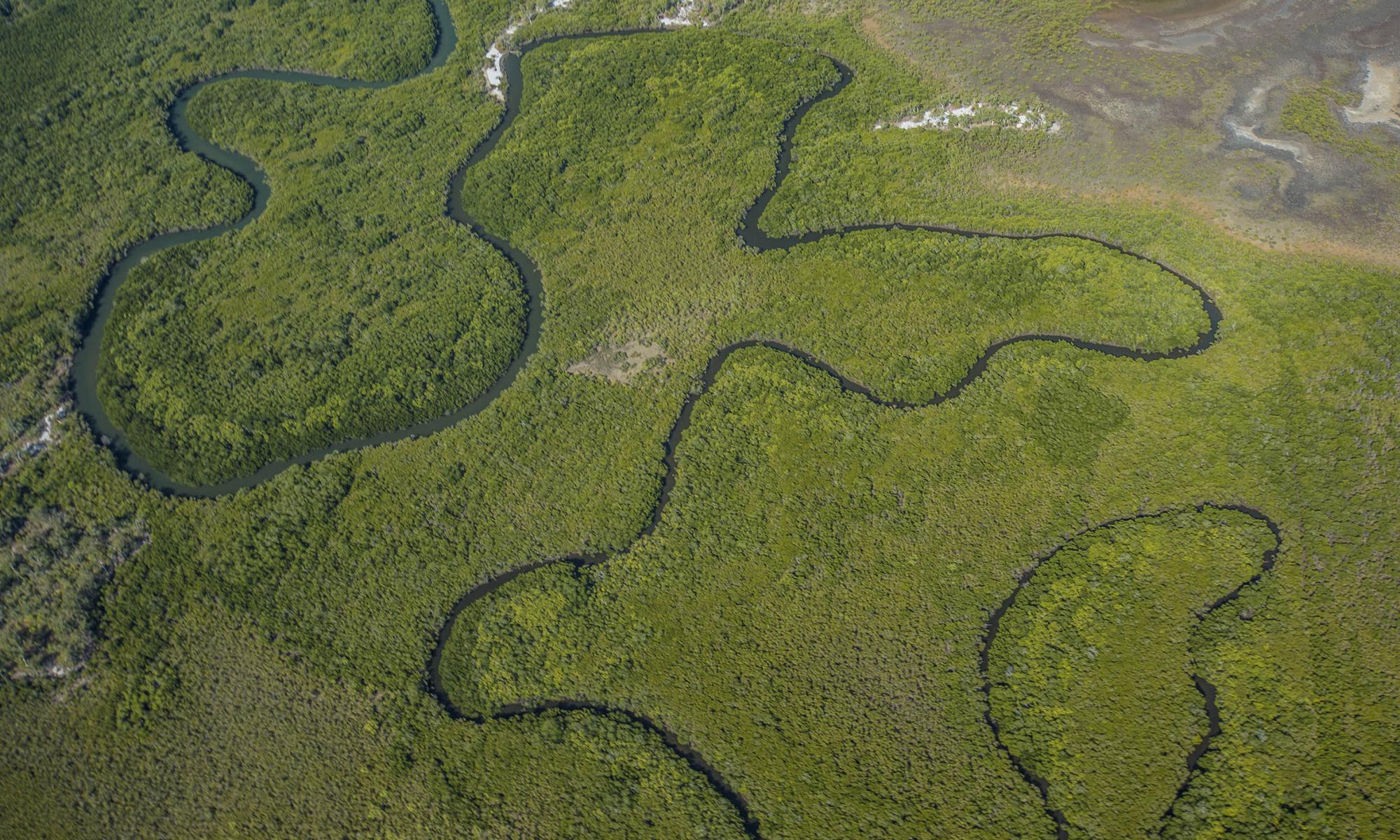 It’s almost dark; the final rays of gold are streaming through the gaps in the trees, casting long shadows on the mossy forest floor, where nothing moves.

The air is rife with the long, drawn croaks of tree frogs as they start their day, and the last shrieks of the cockatoos as they settle in for the night. There is a sudden rustle in the underbrush in front of me. A large, stocky helmeted bird with beady eyes, taloned feet, a bright blue throat and a distinctly red wattle appears, as if time-warped from a prehistoric age.

I look around at the canopy villa in which we are staying at the Daintree Eco Lodge, to make sure we are still safely in the 21st century. Yes, the timber floors remain underneath me, the beautifully-carved tree stump side table is still there to covet, and the forty winks-inducing bed and splashes of green décor are all in their place. My favourite part of this luxurious tree house, the fully mesh-enclosed sun room in which I am sitting, allows me to secretly observe the activities in the forest below, forming an invisible barrier between me and the ancient rainforest (I am not game to share my living quarters with pesky mozzies or any snakes and spiders that may want to cuddle up to me at night). 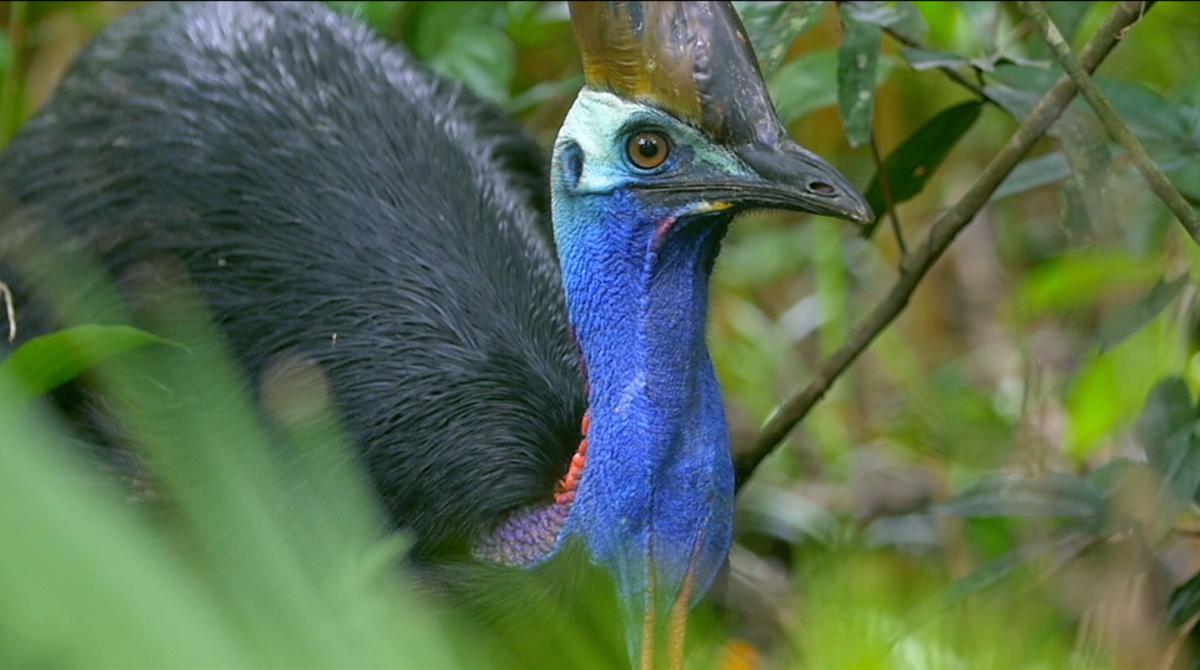 The forest is a living historical record of the evolution of the flora and fauna that form part of Australia’s rich and unique biodiversity. Much of Australia’s native wildlife, including its marsupials, originated in rainforest ecosystems—so their descendants inhabiting the forest today are the closest surviving relicts of ancient Gondwanaland. 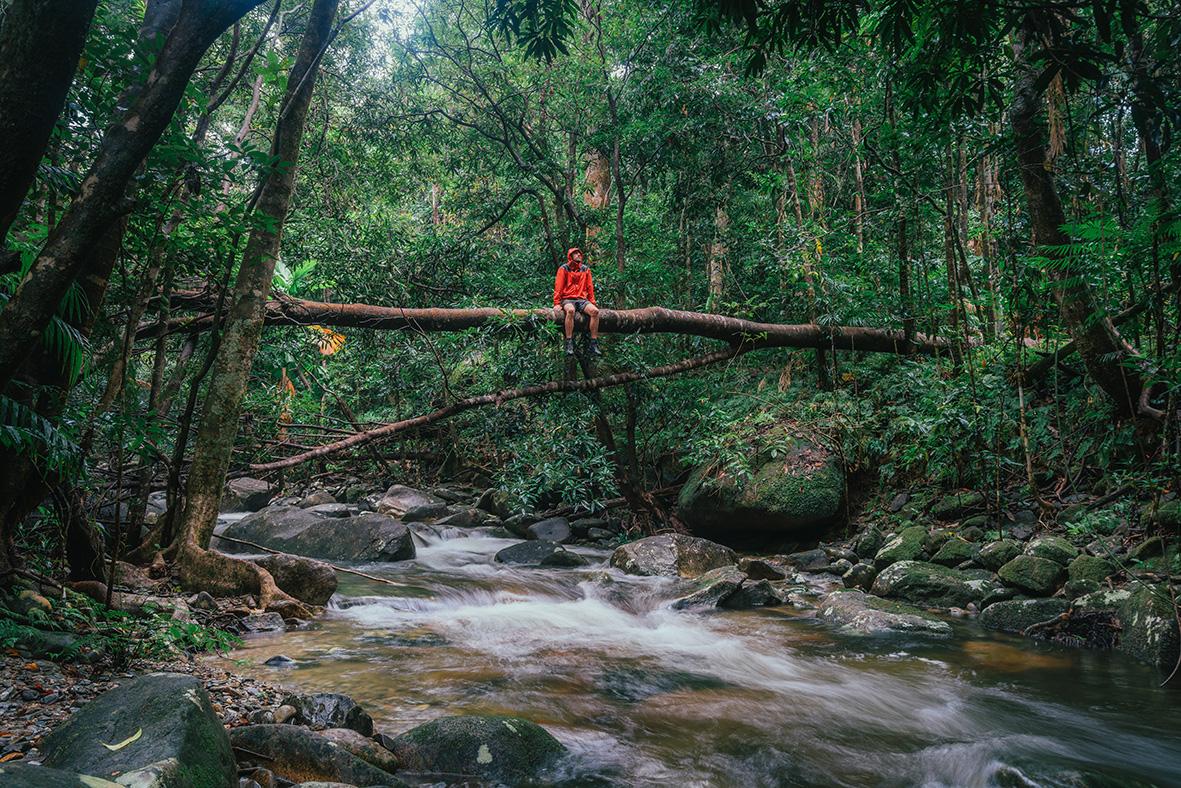 I soon have the opportunity to get up close and personal with some of these descendants, when I play zookeeper for the day at the Daintree Wild Zoo and B&B. Established by owners and avid animal lovers Gil and Donna about 15 years ago, the boutique zoo is located on the cusp of the rainforest. Lisa, one of the zookeepers, is our guide for the day. She greets us at reception, pushing a wheelbarrow about twice her size filled with an array of fruit, vegetables and meat. “The animals are a lot of fun,” she tells us. “Each one has a different personality—but it’s also a lot of hard work." And she is not wrong on either count.

The day is filled with a lot of feeding; cleaning and refilling of water bowls, and removal of poop from the cages, as well as general upkeep and maintenance—such as building or repairing perches for the various birds. Animals need food, water and clean shelters—sounds pretty simple, right? However, there are many intricacies to all of this, which means it can take years to develop the necessary knowledge and experience to become a fully-fledged zookeeper.

Feeding, for example, requires Lisa to have thorough knowledge of the dietary requirements of the various birds and animals. Daintree Wild Zoo houses about 50 varieties of native tropical birds, as well as many ground-dwelling creatures: dingoes, crocodiles, quolls, possums, bettongs and wombats. The cassowary (my time-travelling friend from the prehistoric era) enjoys a diet mainly of fruit. Bananas are its favourite, which it pecks right out of our hands and downs whole in one gulp. The cuddly wombat also enjoys a fruit and vegetable diet—but finds bananas to be rather toxic to its constitution. 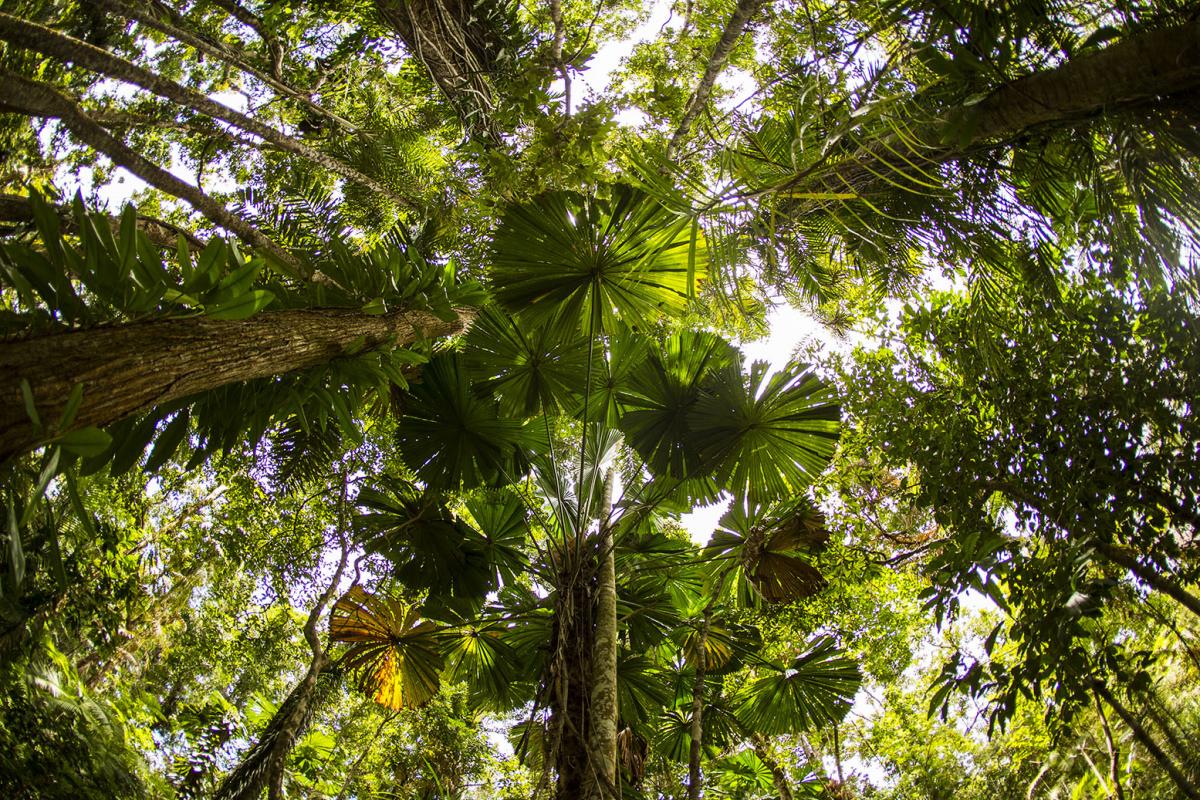 The carnivores of the zoo, including the small, ferret-like quolls with their vampire fangs, the playful dingoes and the rather more intimidating crocodiles, all like their meat rare. The dingoes and the crocodiles are particularly fascinating to watch at feeding time. The zoo has two dingoes, a male and female. Only Lisa, Gil or Donna are allowed to go into their cage. And I can see why: with their wolf-like features and overzealous nature, they can change in an instant from cuddling Lisa on a log like a family pet to careening wildly around their yard in search of hidden meat. Chivalry is well and truly dead here—the female dingo must get to the meat first and fight the male for it, or else go hungry.

There is also no love lost amongst the crocodiles when it comes to feeding time. The Daintree Wild Zoo has around 18 crocodiles, which are kept in three different swamps according to their size so that they don’t kill one another. I throw a piece of meat out to a croc who’s sunning himself on the bank closest to me. Suddenly, there’s a flash and his (much bigger) brother appears out of nowhere to death roll him for his food. These animals take sibling rivalry to the next level. “That one will need to be moved,” Lisa says. 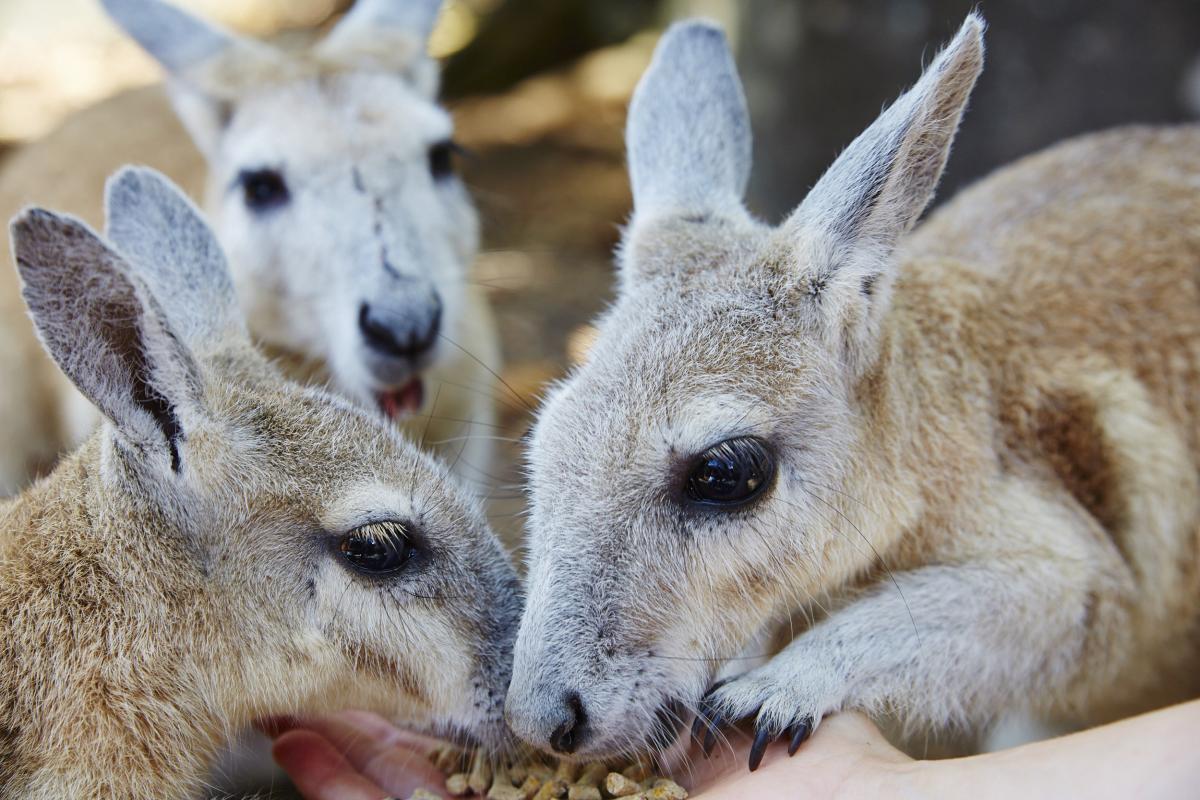 Though the crocodiles can move fast, jumping out of the water at speeds of up to 60 kilometres an hour, they can also move very slowly. The next piece of meat I throw is to a 3-metre crocodile in the neighbouring swamp. Despite my best efforts to get it as close to his mouth as possible (crocodiles do not have very good eyesight), it hits him squarely in the middle of his head and falls into the underbrush beside him. “Take that, you bully,” I want to say, and run away. Instead, I find myself apologising, before spending the next 10 minutes screaming words of encouragement as he inches his large body around in a painstakingly glacial search for the elusive piece of meat.

Although we can’t get up close and personal with some of the larger animals—those that may well want to eat us—we are able to interact one-on-one with some of the Zoo’s abundant birdlife and other tamer inhabitants. The black cockatoos are particularly friendly, immediately flying down to greet us and perch on our shoulders. They serenade and gently peck at us as we clean their aviary.

A cheeky white and pink galah follows us around his cage, pecking at our feet while repeating, “Kiss kiss,” and bopping away to some song only he can hear. We also come face to face with a mesmerisingly wide-eyed golden possum who stares at us timidly from inside a log, sticking his head out every now and then to take a bite out of the fresh leaves we have just given him. Those eyes. I think I’m in love. And then there are the two young, exuberant emus. They push each other out of the way to get in front of the hose I am using, to cool themselves down and then playfully roll around in the puddles created by the water. Meanwhile, their two older counterparts look on this childish behaviour with complete disdain. 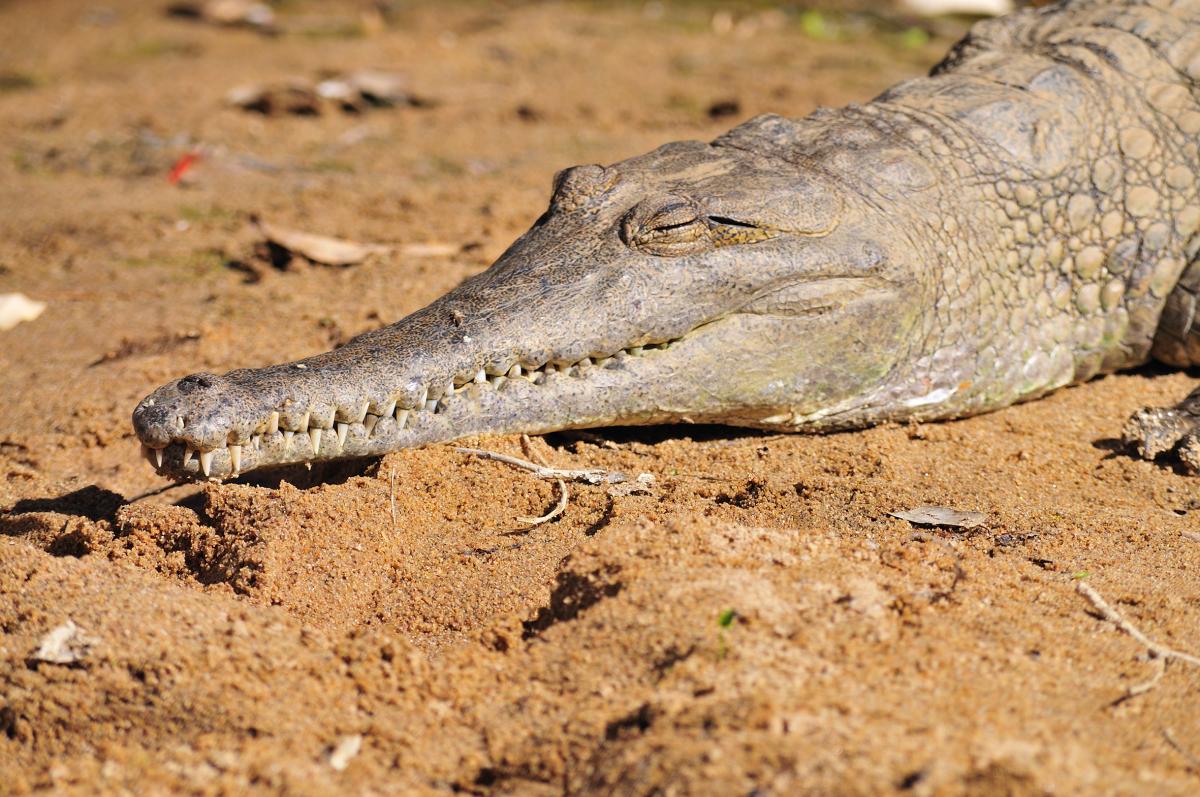 Despite the strenuous work, I can see what makes life as a zookeeper worthwhile: it is the interaction and entertainment provided by each of the animals and their vastly different personalities. So when I leave—sweaty, tired and covered in mud and poop—I do so with a newfound appreciation for both the animals and the people who care for them.

Leaving the animals to enjoy their afternoon, I head back to the Daintree Eco Lodge for some rest and relaxation of my own. The next day, we venture further into the forest for a day tour and jungle surfing safari with Jungle Tours and Trekking. So far, I have had plenty of opportunities to interact with the wildlife of the Daintree rainforest, so this tour allows me to get to know some of the flora that the forest holds, especially the millennia-old trees that tower above. 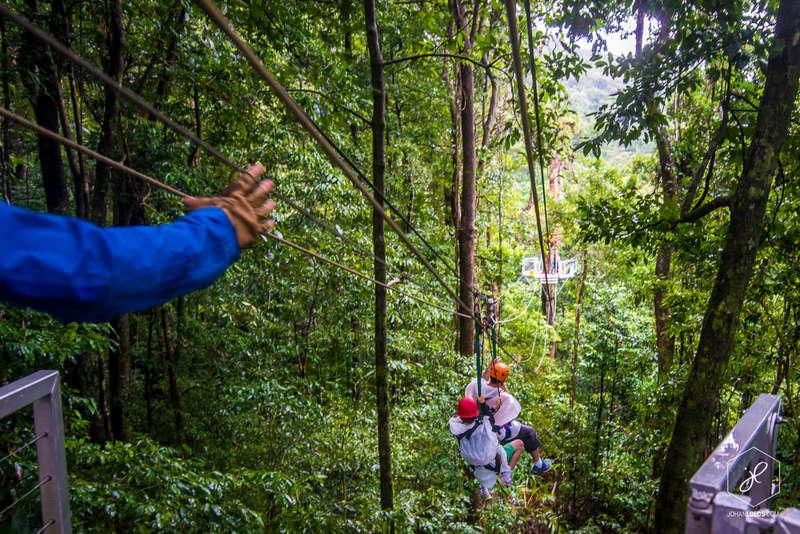 I feel the palms of my hands get sweaty and my heartbeat double its tempo as I step to the edge of a platform 20 metres off the forest floor. Part of me wants to turn around and cling to the cedar tree around which the platform is built, and never let go. Instead, I lower myself into a sitting position and push off. I find myself teetering on the edge, going nowhere, and look up to see a cheeky grin on our guide’s face as he holds on to the rope from which I dangle.

I laugh, “Let go, let go—it’s a lot scarier just sitting here.” I’m soon zooming through the air attached to a zip line, passing a native nutmeg tree underneath the umbrella-like canopy of the Daintree fan palm, then racing past a tree kangaroo that pauses momentarily to survey me as he scurries up a neighbouring trunk. 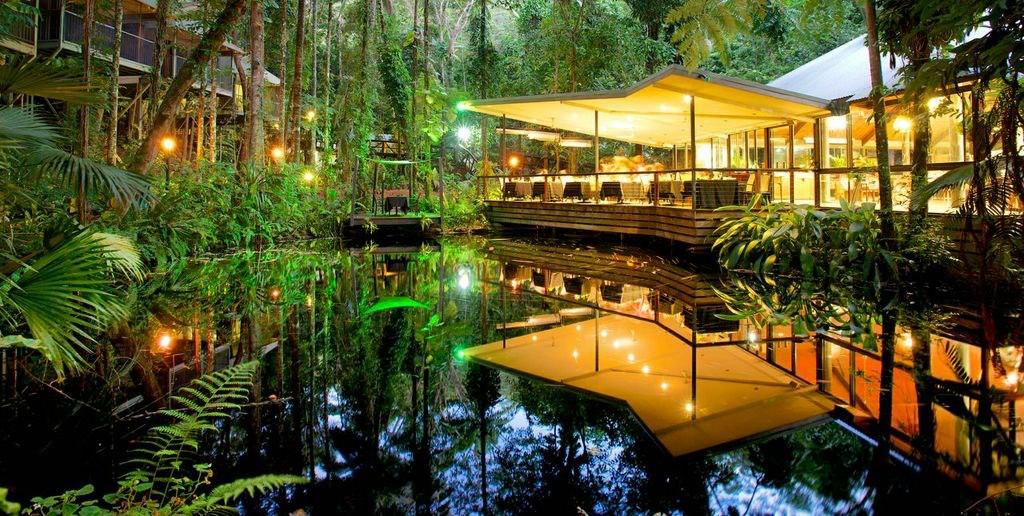 On the next platform, we find ourselves at the crest of a hill amongst the canopy of the trees, with a 360-degree view of the forest around us. The gradient of the land slowly morphs through brilliant hues of green to meet the blue of the sea below. “Do you know what’s so special about that view?” our guide asks. “It’s the only place in the world where you can look from one heritage site to another.”

As I gaze across the treetops to the Great Barrier Reef in the distance, the truly special character of this area dawns on me. It is a place where animal and human inhabitants live in perfect balance and harmony with each other, interacting with each other yet respecting each other’s boundaries. “Live and let live,” as the saying goes.