It began in Africa: around the table of human evolution with the scientists dedicated to finding answers 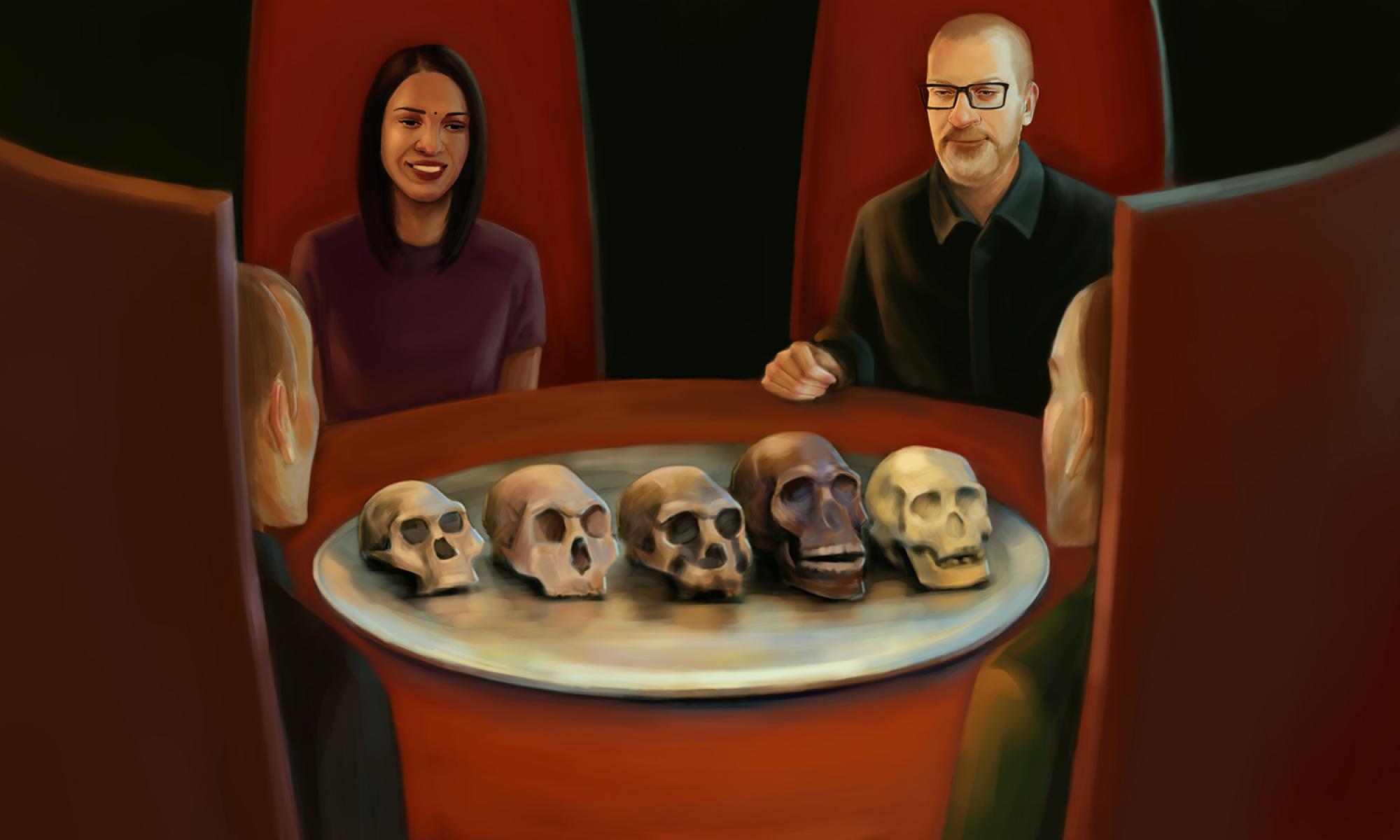 It is innately human to wonder about oneself—likely a side-effect of our big brains and our even bigger egos. How much do we need to wonder though?  Not as much as you might think. The human origin story is studied exhaustively by palaeoanthropologists and archaeologists. They could tell you about the structure of your spine and they could tell you why you want so desperately to be part of the in-crowd (hint: it has something to do with limited resources and high levels of cooperation). The catch is, they might tell you different things.

It is an indisputable fact that modern humans—Homo-sapiens—came to be through the process of evolution. The fossils make that clear. How we spread across the world, though, and how we define the “height” of civilisation, is an idea much more complicated. Even science cannot exist in a vacuum, and the stories often told about who we are as a species and how we came to be are not immune to the sociopolitical pressures of our modern world.

That does not mean we do not know what we know. What it does mean though is that there is robust and informed commentary to be read outside the Western bubble as well as within it. In short, the mathematics of addition and not division should be used to govern the narrative we accept about the origin of our species. It is, after all, a global story, for which we need a broad coalition of global storytellers.

In our interview series, It Began In Africa, we invite you to sit in conversation with a few of these scientists—they'll tell you a bit about who you are, and more, who we are. Tasters from each of our interviews below.

Dr Chris Stringer is a professor and research leader in human origins at the Natural History Museum in London and a fellow of The Royal Society. Stringer's work as a palaeoanthropologist has led him to promote the recent African origin model of human evolution. In our conversation, we explore the fossil record itself and the story he thinks it tells about the birth of our species and its incredible staying power on Earth.

I know you're a proponent of the out of Africa theory which in recent years has shifted to the multiregional African origin theory. Can you explain that shift? What important new evidence has been found?

The multiregional in Africa model is a term I have used, but I think some of my colleagues who agree with the model don't think it's a good name for it. If we go back to the 1980s and 1990s, there were these two polarised models: pure out of Africa—that modern humans only originated in Africa and we evolved there. Then we came out and replaced all the other humans around the world like the Neanderthals. At the other extreme, there was the multiregional model identified with people like Milford Wolpoff that said actually there was this earlier form of human that most of us call Homo erectus, and this earlier species was around in Africa, Europe, Asia and Indonesia, and it was there 1.5 million years ago in each of these places. Then in each area, it evolved towards modern humans. So modern humans didn't evolve in any one place, they evolved all over; everywhere where ancient humans lived, they evolved toward modern humans. They didn't speciate, they didn't go in different directions because they were interbreeding with each other across that whole range, so basically it's the evolution of one species for 1.5 million years. That's the classic multiregional model.

Dr Sheela Athreya is a biological anthropologist and associate professor at Texas A&M University-Qatar. Her work centres on the study of human evolution in Eastern and Southern Eurasia through DNA and fossil records, with a wider focus on decolonising the human origin narrative. Dr Athreya is an advocate for the narrative to move away from eurocentrism—she believes that decolonising is not just about amplifying an alternative point of view, but it is also about not centring it in the colonial point of view in the first place. In our conversation, we scratch at the surface of the popularised theories and uncover some of the colonialism and European bias driving them.

I wanted to talk first about the quote from your study that reads “the marginalised non-Western lands and their peoples leaving the order of superior and inferior more or less unchanged through the history of the discipline.” I found that fascinating and wanted to have you expand on that a little bit.

That came about from my co-author. She's been working in South Africa for the last 20 some odd years, and I gave a talk about how the Asian fossil record has been represented, and she was frustrated because she pointed out that no matter how the narrative goes, Africa is always at the bottom. If it's the site of human origins, they're primitive. If it was the last place to become human, they're primitive. So they can't win. That's actually how that came about was her frustration and observation that the starting point was the primitiveness of Africans and the elevation of Europeans. The irony is that novelties in human evolution—the youngest fossil record for our species and some of the latest developments—were in Europe, and somehow, that's still the pinnacle of our achievement. Everything is then framed as “these various places had art, but it all came together in Europe”, whereas before, in the 1940s and '50s, it was “it all started in Europe and no one else became civilised until after we developed art”.

Dr Curtis Marean, in conversation about the issues of human behaviour, explores the ways in which politicians have taken advantage of our evolutionary predispositions and the hope for using them to combat the climate crisis. Dr Marean is a professor and associate director at the Institute of Human Origins at Arizona State University. He is also an honorary professor and international deputy director at the African Centre for Coastal Palaeoscience at Nelson Mandela University, South Africa. Dr Marean's research focuses on the evolution of modern humans and their behaviours.

How would you pose the argument for evolution and the linear evolution of the human species to somebody that was skeptical?

The simplest thing is to have people sitting down with the actual skulls on a table. Even though human evolution is not linear, there are multiple branches that go extinct and so on over time, there is a trajectory that is easily observable when you put the evidence in front of somebody. That's how we do it in the classroom: we show the timeline and the material evidence and we walk them through the material evidence in a systematic way and explain what happened to these branches that eventually end up going extinct. You have to tell that whole story. There are some species like Neanderthals that go extinct but hybridised with modern humans, and we have some of their genes in us—at least Eurasians do, Africans don't. That's a different kind of ending; they go extinct but have snippets of DNA that survive in us. So we really have these two lines of evidence—we have the fossil record and we have the genetic record, and that's increasingly become important.

Dr Ian Tattersall is a palaeoanthropologist and an emeritus curator at the American Museum of Natural History in New York City. His studies in human evolution explore the thought systems of early humans and the diverse patterns of the fossil record. In our conversation, we discuss how modern humans code the world into a unique vocabulary and why it's so important.

I know that your work focuses on the thinking patterns that are innately human and how we've evolved to have those. Can you speak a little bit on how much of our thinking and behaviour you think we are evolutionarily predisposed to participate in?

It's been argued a lot that our societies are highly cooperative and therefore, our societies were more effective and efficient than other hominin societies, and we edged them out that way. I look at it in a more general way. I look at the way we basically process information in our minds. I think that basically all of the peculiar things about our society and really everything else that we do stems from this strange central ability that we have to manipulate information in a symbolic manner. What we do is we basically deconstruct the world into a vocabulary of symbols. Instead of sort of holistically experiencing the world, we create individual symbols for the things we see, and then we can recombine those symbols and come up with new ideas on the world and how it might be, and that reflects on everything else that we do.